Anatomy of a rescued project

I admit I have yet to knit the last sleeve of my black silk SKB. I’ve got a number of WIPs going right now, I only wish I could somehow add a couple more hours to each day so I could spend more time knitting.

I became distracted from my baby project (but will soon be getting back to it) and at the moment I’m switching back and forth between my shawl and an old UFO which I’ve resurrected and am determined to finish as soon as possible . . . just because I can no longer stand the thought of leaving it undone.

This project is actually my original Simple Knitted Bodice — the one I chose to knit in Red Heart Super Saver and SWTC Phoenix Bamboo. I do have an explanation for choosing the RHSS, but it’s a long, rather pathetic story that has to do with my . . . em, shall we say frugal side. The yarn color is called Dark Plum, and I adore it. For the lace section I initially had no idea what yarn to use, until I realized that my Phoenix Bamboo colorway called Purplexed was a beautiful match (in terms of hue, not fabric). It seemed an inspired choice, at least initially. 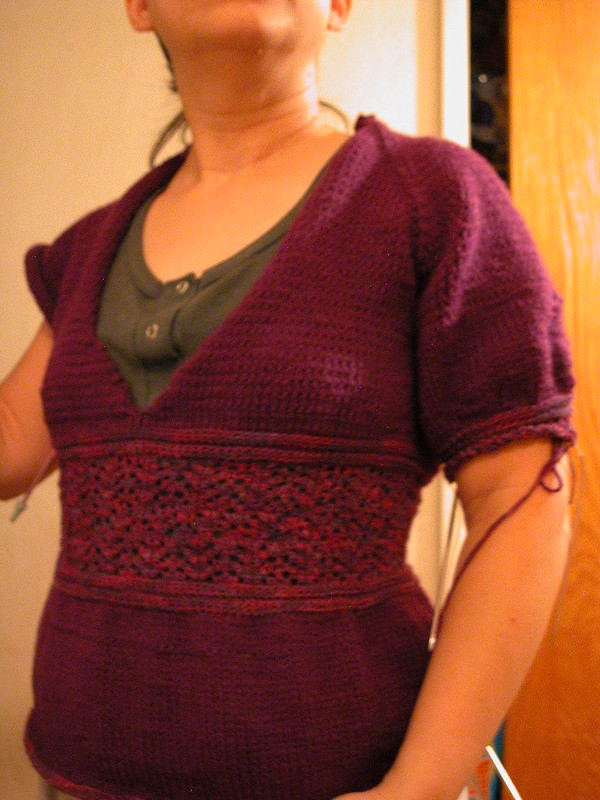 I got a little farther than this; I actually knit the entire right sleeve all the way to my wrist. But I was dissatisfied because the forearm section puckered and ballooned very strangely. I put the sweater away for several months; and then eventually I decided to frog the sleeve AND the lower section of the body. I re-knit the bottom trim in RHSS instead of bamboo, thinking this would be an improvement.

It was NOT. I have no photos, but what I ended up with reminded me of the dresses worn by Jane and Judy Jetson. The bottom portion of the sweater flared stubbornly outward and would not lie down — even after I ran the sweater through the washing machine in the hopes the yarn would relax.

Part of the problem, I realized, was that I had knit Red Heart Super Saver on Size 7 needles and ended up with a fabric so dense it could probably stop bullets. I decided to ignore that issue, but the flaring was hideous — so off to the frog pond it went yet again. It was only two nights ago that I decided to give the project one last try. I actually went down a needle size (to US 6) and knit the lower half of the body again; and I decreased like a madwoman instead of following the pattern instructions for hip shaping.

Oddly enough, this tactic worked wonderfully! I’m now happy with the way it looks, and I’m proceeding on to the trim. This time around I’ve decided to use the Phoenix double stranded; there’s less of a difference in gauge between the two yarns and so less puckering. I’m planning to use the double stranding technique on the neck trim as well as the sleeves.

Speaking of the sleeves, several months ago I very reluctantly ripped out my painstakingly knit lace on the right-side sleeve — but not before taking several photos. I was so proud of that sleeve, partly because this was my very first attempt at lace. 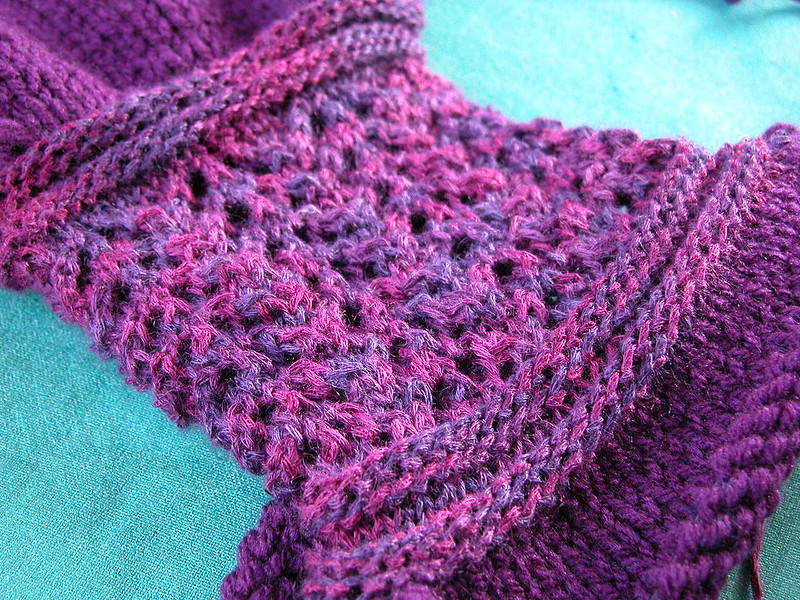 Here you can see what happens when you pair two yarns of very different gauges.

I may have kissed it goodbye before frogging it . . .

I haven’t yet decided whether or not to re-knit the lace on the sleeves. I do know that the sleeves are going to stop above the elbow; and since my upper arms are only about 6 inches long, that doesn’t give me a lot of room to play with.

I do plan on wearing this sweater once I finish it, and I plan to wear it with pride — this is the very first sweater I ever started to knit. Since I began it, I’ve actually started and finished three other sweaters (four, once I complete the black silk SKB), but this one was my very first.

And I’ll never be able to consider it “perfect” because of another issue: the top part of the body was knitted (accidentally) in twisted stockinette, and the bottom is knitted in “normal” stockinette. Why? Well, when I first learned to knit, I was taught English style, wrapping the purl stitches counterclockwise. I knit that way for a long time — but somewhere along the line I began wrapping the stitches clockwise . . . because it was easier, I guess! I didn’t even realize what I was doing.

This photo showing the twisted stockinette is from another project, my Cable Vest. It was while I was working on this that I finally realized what I was doing wrong.

And when I discovered that the stockinette I knit flat didn’t look the same as the stockinette I knit in the round, I was genuinely confused. I’m embarrassed to admit that it took me WAY too long to put all the pieces together and realize what was going on; in the meantime I continued to knit twisted stockinette despite the fact that I absolutely hated the way it looked. I knit the top part of this SKB in that twisted stockinette; and I figure that if I wanted to correct my mistake I’d have to pretty much frog the entire sweater. Either that or perform intense sweater surgery, and I’m not prepared to do that at this point.

So, the sweater and I will have to live with our imperfections; but I absolutely do not want to relegate this sweater to the back of my closet just because I made some poor decisions and a few beginner mistakes. I want to feel proud of this sweater, if for no other reason than that I will have actually persevered and finished it. And I will finish it. I’ll be wearing it this year once the weather turns cool, and if anyone asks me about it I’ll be happy to explain that it’s the very first sweater I ever knit.