Six months ago, back in February, when I was still working my way through my dad’s old color slides for Memory Monday, I shared a bunch of images from the 1978 road trip I took with my mom and dad to British Columbia.  At the time I mentioned that although I hadn’t shot any photographs myself in 1978, I did have some pictures from our repeat trip the following year.

I meant to share them here earlier but forgot! So for the next few weeks, I’m going back in time to June and July 1979 via my old prints and a few excerpts from my handwritten “Daily Vacation Log.” I hope you enjoy my memories! 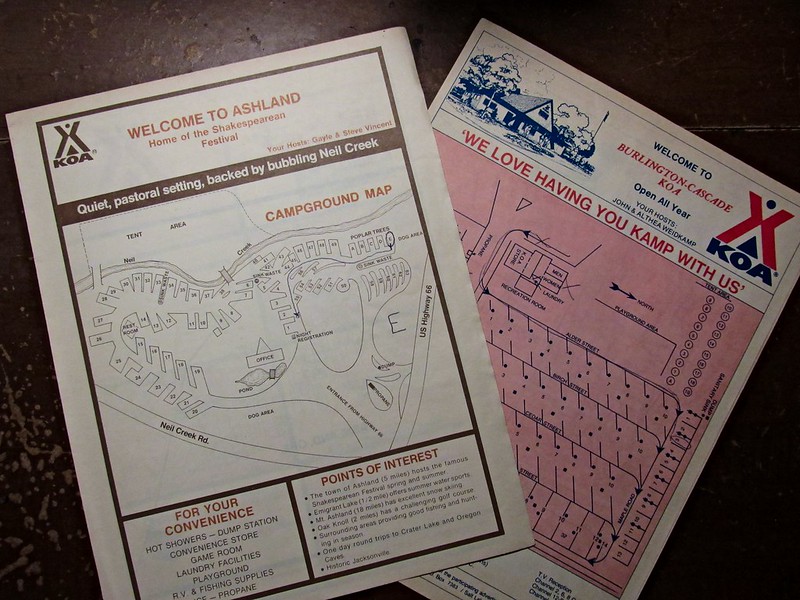 I’m not sure why I don’t have any pictures from the first leg of our trip up through Oregon and Washington; there was plenty of cool stuff to see, and I had borrowed my sister’s Kodak Instamatic, after all. But even though my notes tell me I was more interested in listening to music on my tape recorder and reading (not to mention documenting Every.Single.Thing we ate on the trip), I did manage to save leaflets from the KOA Campgrounds in Ashland, Oregon, and Burlington, Washington.

We actually had another member of the family accompanying us on this trip: our new puppy, Penny, who was less than 6 months old and not much bigger than a large squirrel. She was part Chihuahua and part toy Manchester terrier. We made frequent stops for her to stretch her tiny legs and answer the call of nature, and she did very well on the trip and brightened our travels even more.

Penny shares her food with a local cat who invited herself to lunch near Victoria, B.C.: 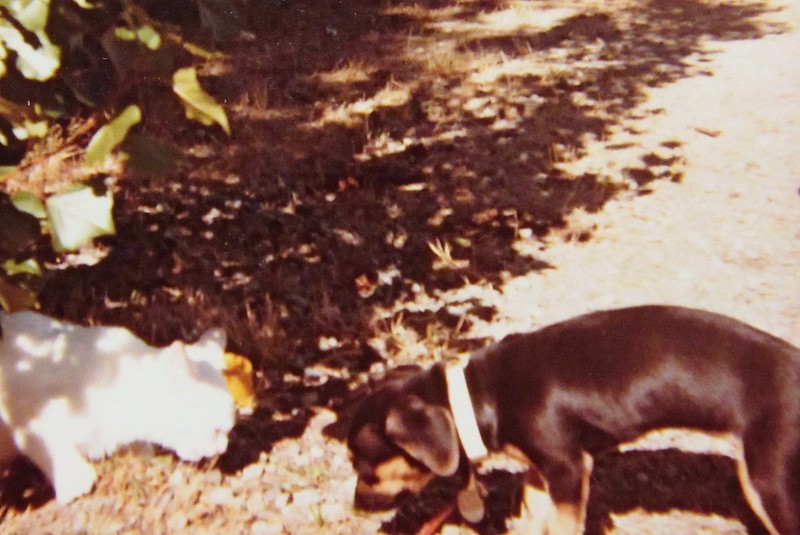 We left Burlington early in the morning and drove to Anacortes to catch the Washington State ferry sailing through the Channel Islands to Victoria.  I did enjoy the ferry ride but wasn’t terribly impressed by the MV Evergreen State, describing it as “nice but nothing special.” At the time I had no idea she was one of the largest ferries on the West Coast, having been launched in 1954 with an engine taken from World War 2 destroyer escort USS Mitchell. She would continue in service, even after her official retirement, until 2015.

After about 2.5 hours we drove our camper off the ferry at Sydney, B.C., on the Saanich Peninsula and headed south to the beautiful city of Victoria. There in the Inner Harbour I spied a ferry I found much more impressive, the SS Princess Marguerite, preparing to sail to Seattle later on that day. I wrote in my log, “It carries mostly pedestrians and a few cars (small ones) and is so big and fancy it almost looks like an ocean cruiser.” I would have loved to go for a cruise on this Glasgow-built vessel, but it was not to be. I contented myself with a photo shot from much too far away. 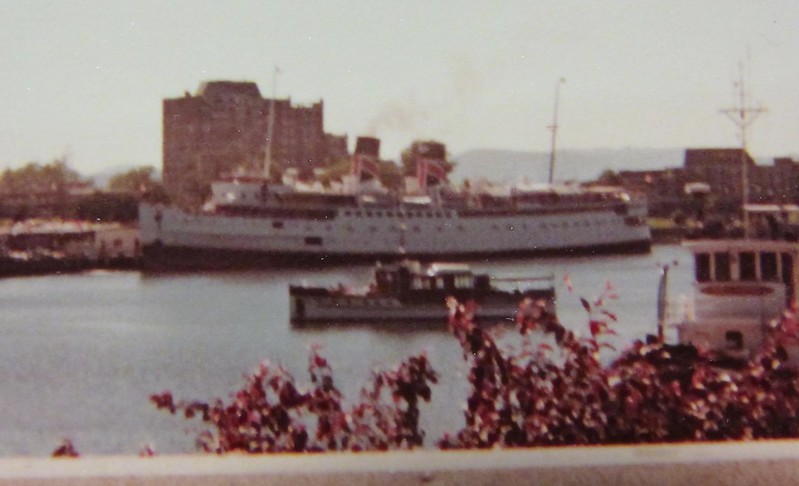 One of our first stops on this day was the Royal London Wax Museum on Belleville Street. Last summer it had been “too expensive” to go inside, but this year it was on our list of things to see. I’d never been inside a wax museum before; I was so captivated by the figures I wrote down everything I remembered seeing and brought home a souvenir book to help me remember. 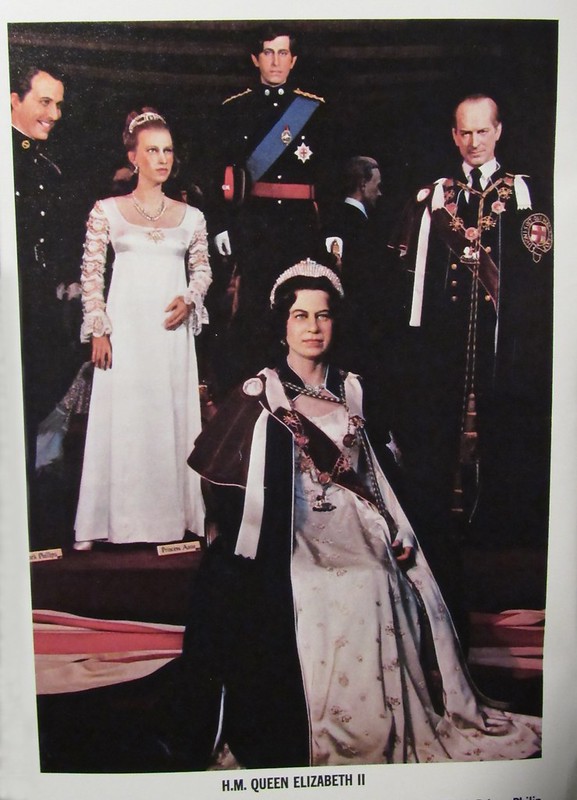 When we were in Victoria the previous summer we’d spent a wonderful afternoon exploring the Provincial Museum. We’d enjoyed it so much there was no question about going back, and I reported in my notes that “we saw almost everything we’d seen before.” I also took a picture from a third floor window of the Carillon structure which houses 62 bronze bells cast in Holland. We were lucky enough to hear the bells chiming at noon. 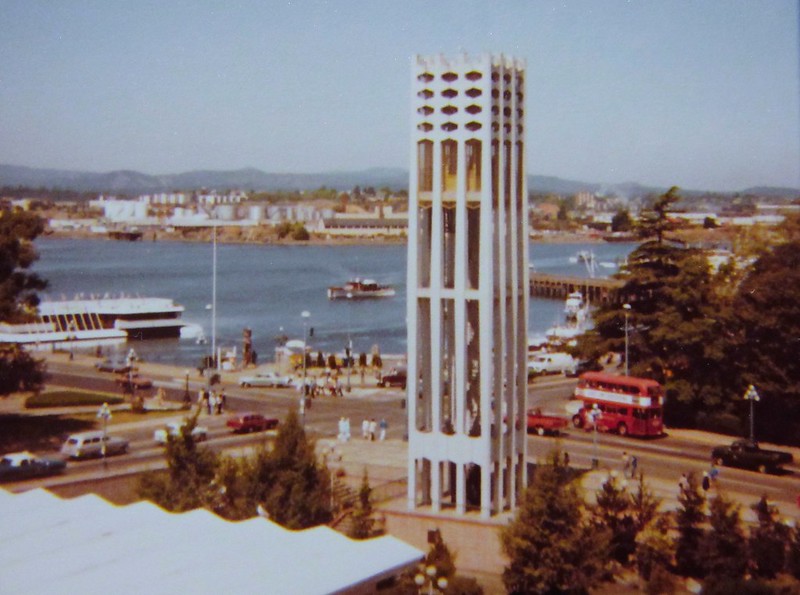 The following day we headed north from Victoria on Highway 1, planning to catch a B.C. Ferry at Departure Bay near Nanaimo. About 30 miles north of Victoria we pulled over at the Malahat Lookout; at the time I mistook the body of water below as a lake — only to learn much later it’s actually the Saanich Inlet, part of the beautiful Inside Passage. 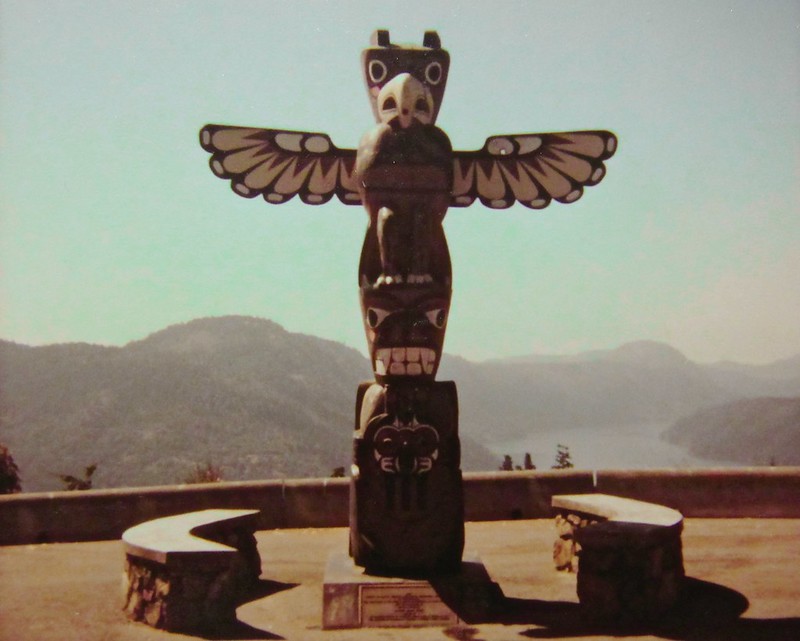 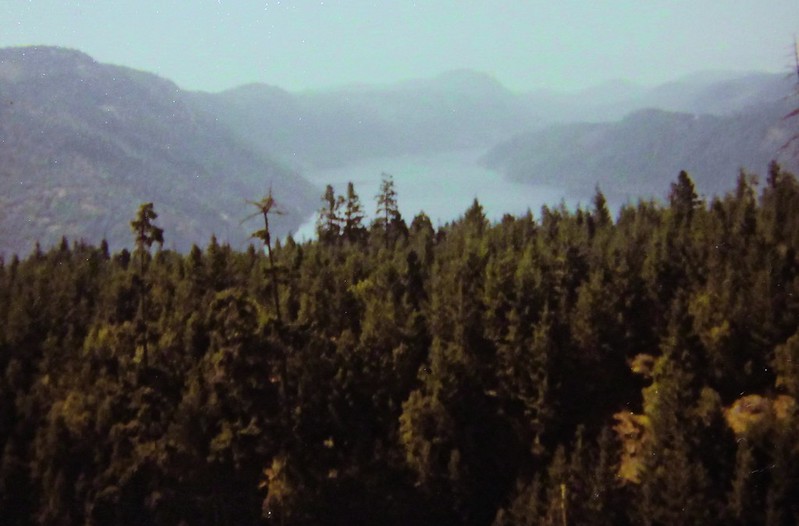 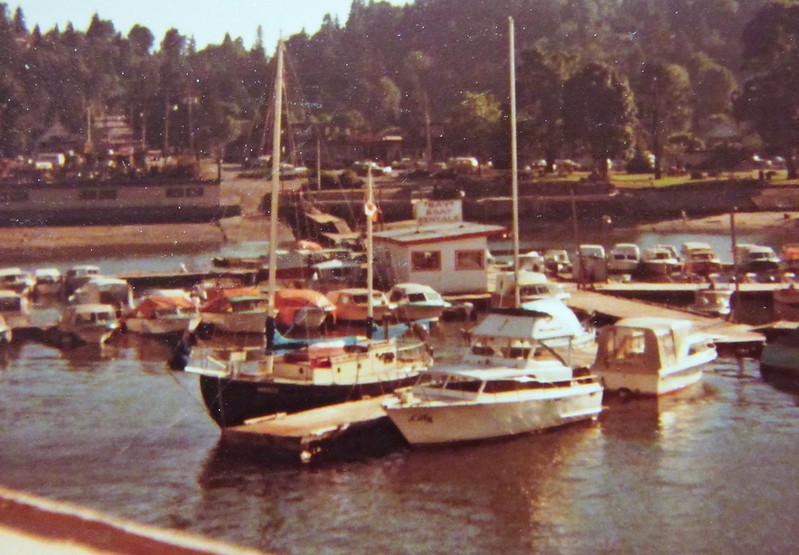 After arriving in Horseshoe Bay on the MV Queen of Coquitlam, we spent one full day in the area of Vancouver, B.C. — visiting Heritage Village (now called the Burnaby Village Museum) and the amazing Capilano Suspension Bridge — but for whatever reason I completely failed to use my camera during this leg of the trip. Apparently I didn’t pick it up again until we had boarded another ferry, this time the MV Queen of Saanich, from Tsawassen to Swartz Bay, 20 miles from Victoria. From there we caught the Washington ferry to Port Angeles, and that’s where I’ll pick up the story next week. See you then!

Ships that pass in the cold overcast morning light