The TV show Northern Exposure aired in the US from 1990 to 1995. It was set in the fictional small town of Cicely, Alaska; but it was actually filmed in the very real small town of Roslyn, Washington. In the fall of 1996, while my mom and I were visiting Leavenworth, Washington, I persuaded her to make the roughly one-hour drive with me to Roslyn to see the location for ourselves.

On the right, under the Northwestern Mining Co. sign, was Dr. Joel Fleischmann’s office. During our visit it contained a small museum honoring the TV show, with a few mementos, like fragments of a piano flung by a trebuchet and the ornate Augsburg clock seen in the Season Four episode “Nothing’s Perfect.” 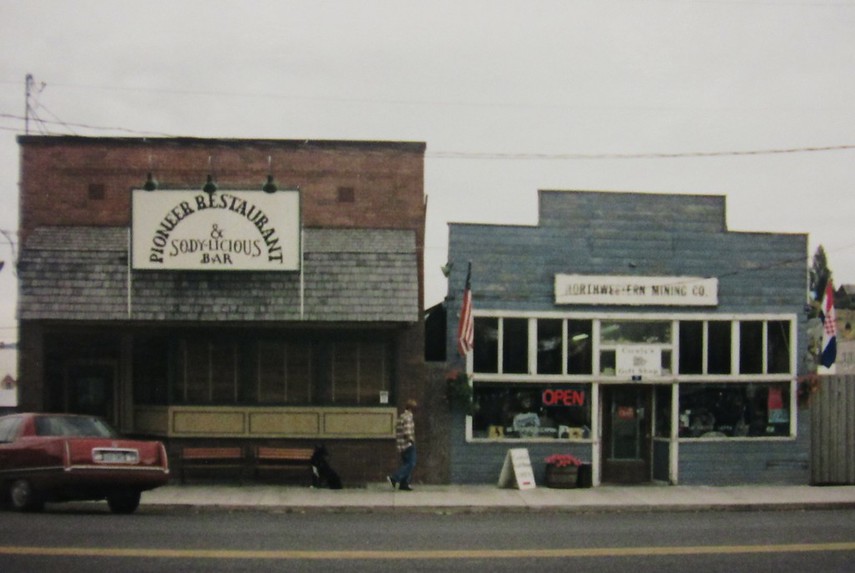 Maurice’s newly acquired ancient Augburg clock is delivered to Cicely with a highly trained specialist (Mark Pellegrino as Rolf Hauser) to install it. Although the clock is stunning, Maurice is disappointed it does not keep perfect time and demands a refund. Holling and Rolf help Maurice weigh the value of time versus the magnificence of this ancient relic — Episode synopsis quoted from The Northern Exposure Book by Louis Chunovic

The red brick building on the corner with the Northwestern Improvement Co. sign contained the fictional KEBR Radio station, manned by the loquacious Chris Stevens; he was played by John Corbett.

Across the intersection from KEBR sits The Brick. In the TV show, it was run by Holling Vincour and his young wife Shelly, and it served as the anchor for townfolk, a place where you could find anything from a quick bite to eat to a leisurely game of pool to some serious life advice.

The blue van was featured in at least one episode of the show — but the Marlon Brando mural in the background was a surprise!

The sidewalk along Pennsylvania Avenue:

As we were leaving Roslyn, we drove around the block behind Pennsylvania Avenue and noticed a church building which looked deserted and overgrown with weeds. Then we noticed the sign by the door — it said “Cicely Community Church.” I do recall seeing this building in a number of episodes. I’m not entirely sure, but I don’t think this structure still exists; maybe it was merely a temporary part of the Northern Exposure set.