Time to check in

I’ve been away for a bit — ran out of things to say, I guess, and then I got very busy. Keeping up a blog is a serious business! It takes dedication, organization, and discipline; and while I’ve got the dedication I don’t have a whole lot of the other two ingredients.

Oh, well. This week’s been busy, as I was trying to prepare myself for the charity ride I mentioned before, Ride For A Reason. Since my work has been extremely slow (as in, I’ve had nothing for a few weeks now) I had plenty of time to devote to details like finding a suitable jersey. When I signed myself up, I accidentally put myself on a team called Q-Vino. I knew nothing about the team, but through email with a very nice woman I learned that they’re a small group of fun-loving folks who were happy to have me. She told me they would be wearing white polyester shirts, and she sent me several iron-on transfers with the team logo.

I had a couple of tee shirts, one of which was actually 100% polyester, but they were too large, so I figured I could haul out my sewing machine, figure out how to use it, and alter one of the shirts to fit me, then iron on the logo. All much easier said than done, especially since I long ago lost the sewing machine manual.
First, I practiced on a spare cotton tee shirt. It looked okay, except that I made the sleeves just a bit too tight. I later cut the sleeves off, but I liked the look of the practice shirt, if I can get the technique down.

Oops, that’s a LITTLE tight there!

On Friday — the day before the ride — I was so nervous about messing up my shirt that I ran out to Kohl’s and hunted around until I found a white 100% polyester jersey that I liked. It was a lot harder than I imagined; I circled the store three times, checking out every flash of white I spotted. There were tons of white 100% cotton tee shirts, but it took me a long time to finally scrape up a few that were cotton/poly blends. I even found one that had bamboo in it! I headed to the dressing room with a handful of hangers and quickly sorted them out, narrowing it down to two shirts. One was a sleeveless Nike, and the other was a short-sleeved, V-neck Adidas; both were 100% polyester but the fabric looked very different to the fabric of my 100% poly tee. I also wasn’t sure either one would take the iron-on transfer.

But I bought both of them (the sleeveless one just because I couldn’t resist it) and threw all three shirts into the washing machine, then set to work at the sewing machine again. I had to figure out how to wind the bobbin with white thread. I must have done this way back in my past, because even though I have no manual and no help at all and have no conscious memory of how to do it, I fairly quickly bumbled my way into it and got a very nicely wound bobbin.

Well, long story short — I decided to try applying the iron-on transfer to the new Adidas shirt, figuring that if that worked, I wouldn’t have to bother with the sewing machine. And it did work, very nicely. I still plan on using the machine to alter a few too-large tee shirts I own. But it was a huge relief not to have to mess with this right at the last minute.

I promise to write more about the actual ride next time. Unfortunately I chose to leave my camera at home, so no pics of my own to share.  I may be able to find some event photos on the web later on, though.

In other news, my very first baby knitting is going very well. I’d be done by now, but I put it aside for a few days. There’s really no big rush; Sophie was born a few days ago and, although perfectly healthy, is a little on the small side. I’m working on adding the I-cord to the bottom, then I’ll be finished and can send it on its way.

I’m very happy with the way it’s turned out, and I think she’ll look beautiful in it.

I also finished what I’m calling my Purple Haze SKB. As I’ve noted in earlier posts, I’ll never see this sweater as perfect; to me, it’s full of flaws that perhaps no one else would ever notice. But I’m still proud of myself for finishing it, and when the weather eventually turns cool, I’ll be wearing it.

I also started and finished a second ice pack sleeve in a matter of a day or so. Around here we’ve got two ice packs, and the second one is quite long and thin. After finishing the initial sleeve, I realized that I needed one for the second ice pack; otherwise, I’d never use it at all. I had a partial ball of Sugar ‘n Cream in a colorway called Midnight Magic (I’d used it to knit a dish towel for my brother-in-law and his new wife), and it turned out to be exactly the right amount of yarn. To me, that says it was meant to be! 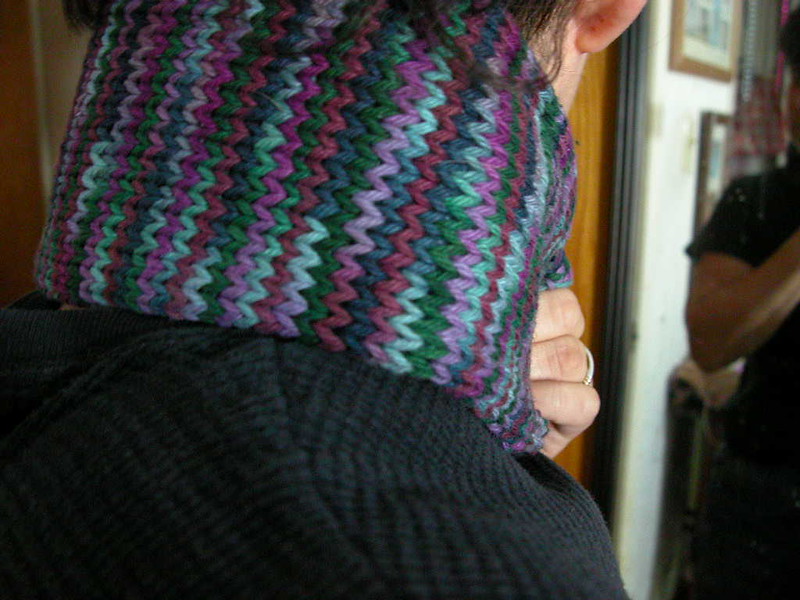 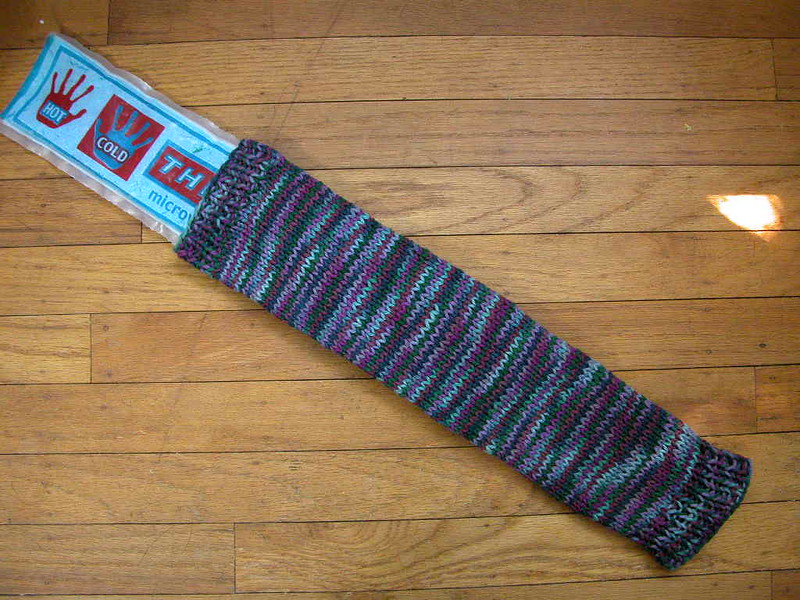 I’m very happy with it, and it was a very fast knit! The only thing I might do differently next time (if there is a next time) is to go up a needle size, maybe even two. The fabric on US Size 7s is pretty dense.

This has been a rough couple of days for me largely due to lack of sleep. I’ll hint at my next post by saying that I got about two hours of sleep the night before the charity ride, so that made it extra fun. But things are looking up a bit in that work is starting up again; I’ve got work to keep me busy this week, and from all accounts I’ll have a steady supply of hearings to type up from now on. In other words, my summer vacation appears to be over!

Since I’m still dragging a little bit, I’ll save it for next time to write more. Let me just leave you for now with a few pretty yarn pictures . . . 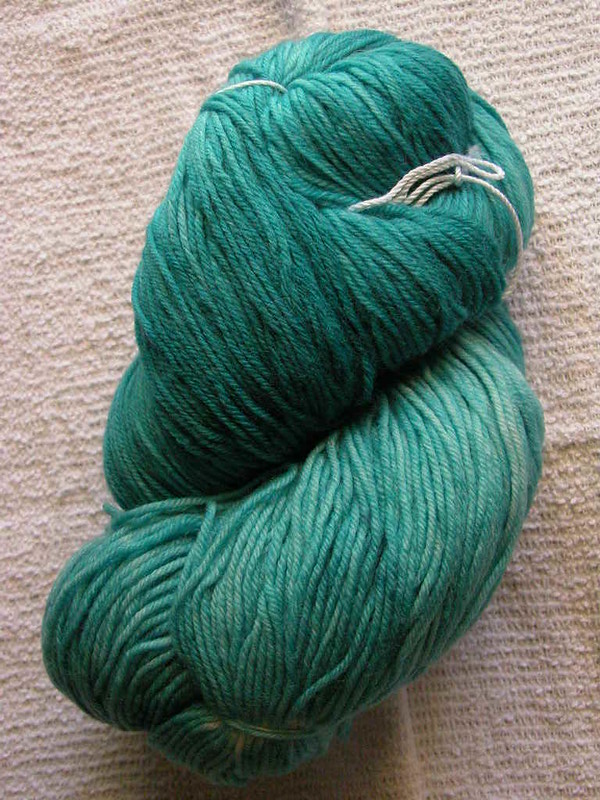 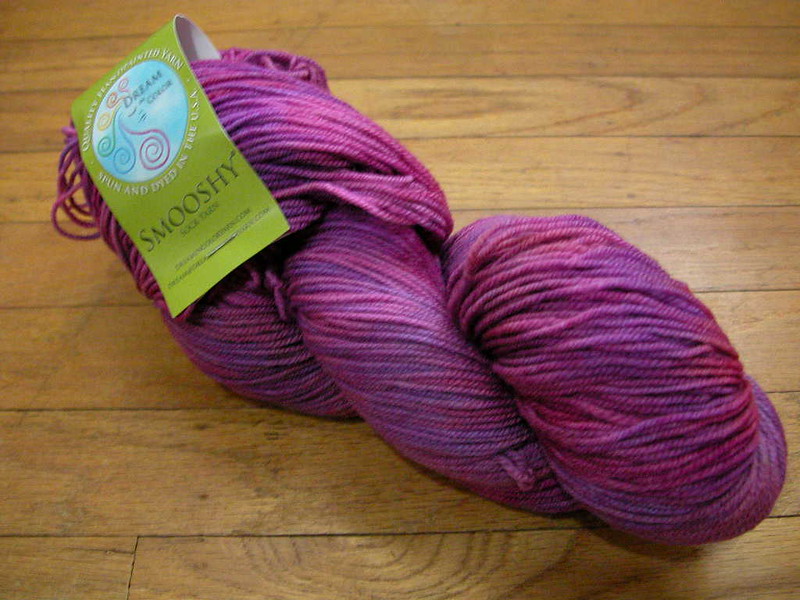