It’s been on my mind for quite awhile to write about this subject.  Everything that follows pertains mostly to the stretch of American River Parkway between Beals Point and the Nimbus Fish Hatchery.  In this post I’m focusing on the paved bike trail rather than the off-road areas.

I feel extremely lucky to live very close to the American River bike trail, and I use it a lot, for exercise and recreation.  Currently that means I get out there and hike 5 to 6 miles a day, anywhere from four to six days a week.  For most of 2014, I was actually walking 8 miles a day, seven days a week.  And since I’ve now lived in the same neighborhood for the past  29 years, I can’t count how many miles I’ve covered on and around the upper American River Bike Trail, both on bikes or as a pedestrian.

Since I’m naturally an introvert, these days I usually choose times when there are not so many other people active out there. That means early in the mornings and on weekdays rather than the weekends, which can get a little bit crazy during the summer.

I’m very glad people around here realize what an awesome natural resource we have in the American River, Lake Natoma, and the paved bike and dirt trails on both sides of the lake.  The paved bike trail in particular is categorized as “mixed use” — that means you’ll see single joggers, large groups of runners, people walking alone or in groups, maybe with their dogs and/or small children in tow.  And of course the cyclists in all their varieties:  slow cruisers, seriously fast road bikes, recumbents, and occasionally other human-powered contraptions in a category of their own. 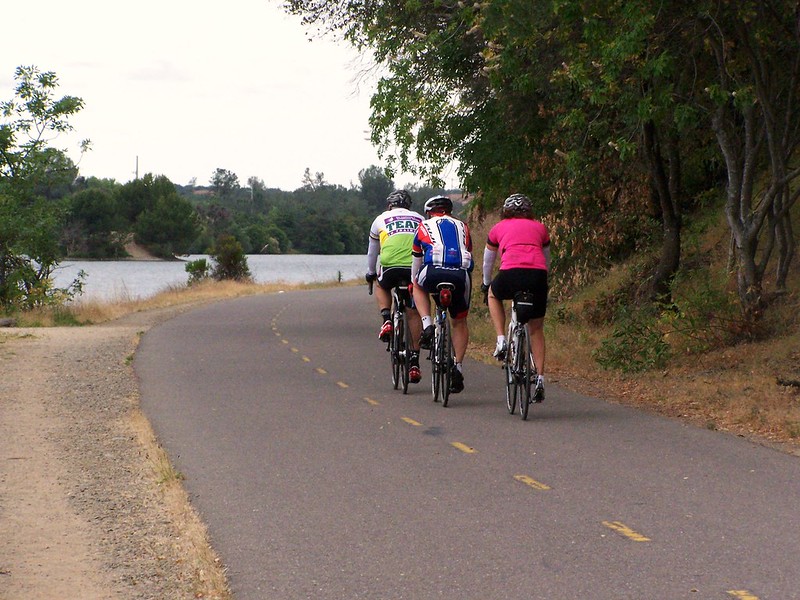 Now, here’s the thing.  At various times there may be an awful lot of people sharing the bike trail.  This means a certain degree of common sense and a few guidelines are in order.

If you enjoy using the bike trail, part of the enjoyment is keeping your eyes and ears open to what’s going on around you.  If you’re just moving along wrapped up in your own little world, you may be getting exercise, but believe me, you’re missing the best part of the experience. 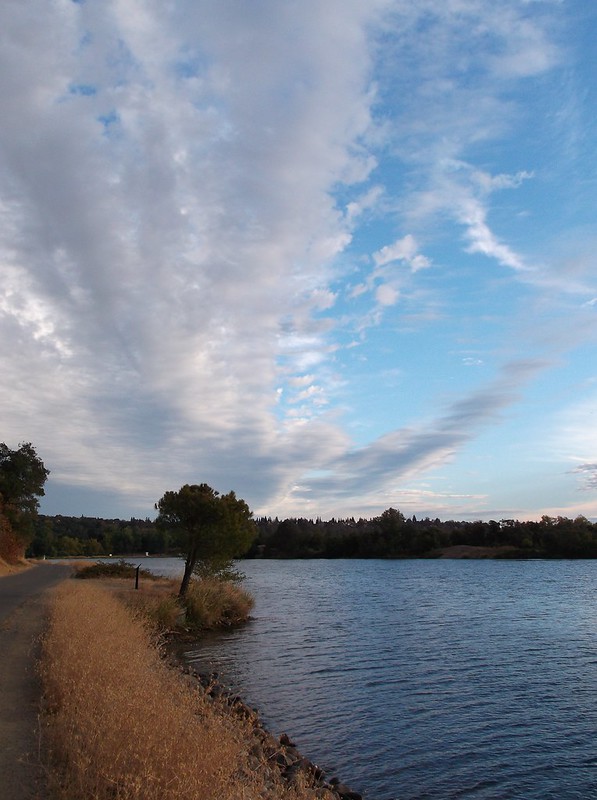 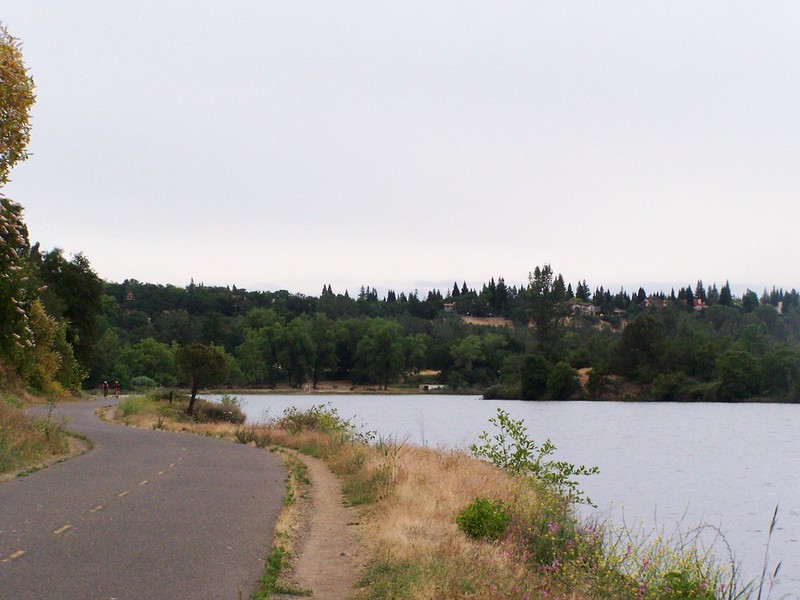 That’s not to say you shouldn’t listen to music while you exercise!  My tactic has been to put one earbud in my ear and leave the other one hanging around my neck.  I keep the volume on my mp3 player at a level where I can hear the music (or the book) I’m listening to but at the same time I can hear bikes or runners coming up behind me.

And besides using my ear(s), I like to keep my eyes open, checking over my shoulder now and again just to make sure I have a safe cushion of space around me in whatever direction I’m moving.

Not paying attention to other people using the trail makes you a possible danger to yourself and others. Quite a few cyclists like to really push themselves, and they’ll be out there flying along at 20 miles an hour. Would you casually step in front of a speeding car on the freeway? Would you stroll down the center line of a busy two-way street with your back to onrushing traffic?

If we pedestrians are going to use the bike trail, we have the responsibility of making sure we know what the rules are and that we’re prepared to abide by the rules. For example, at certain spots along the bike trail, pavement markings indicate that pedestrians should keep left, i.e., to walk facing the bike traffic.  If you think about it, that’s really just common sense, and most people seem to get it — but there are a few who clearly don’t. 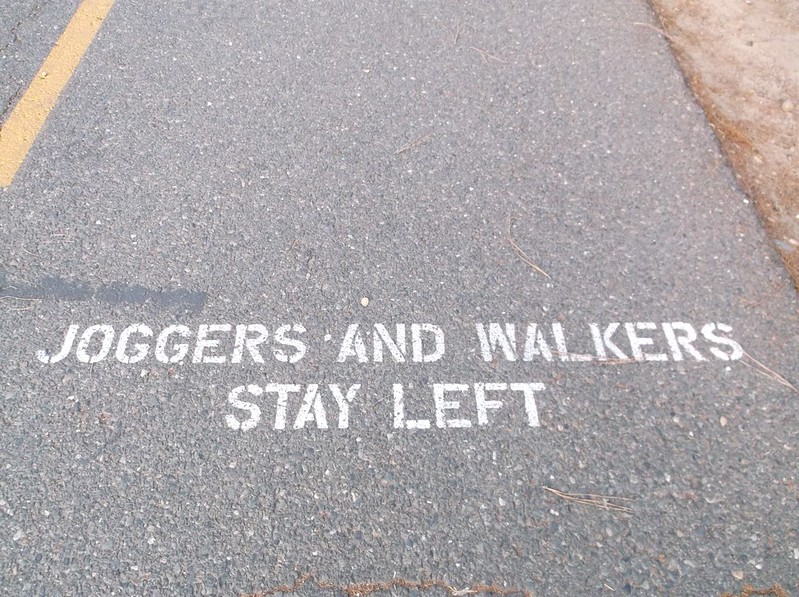 Walking down the right side of the bike path means that you won’t see cyclists coming up behind you.  It means that to dodge around you, the cyclist is going to have to cross the center line into oncoming traffic — often on blind curves.  And sometimes it means that the pedestrians, startled by the cyclist’s warning shout of “On your left!” or “Bike!” will react in completely unpredictable ways and wind up creating even more chaos.

Now, if it’s your first time using the bike trail as a pedestrian, people are usually willing to cut you some slack.  But again, you need to pay attention to your surroundings and spend a little time thinking about what’s the best way to share the space with other people.  Simply put, on the paved bike trail, bikes have the right of way, not pedestrians. 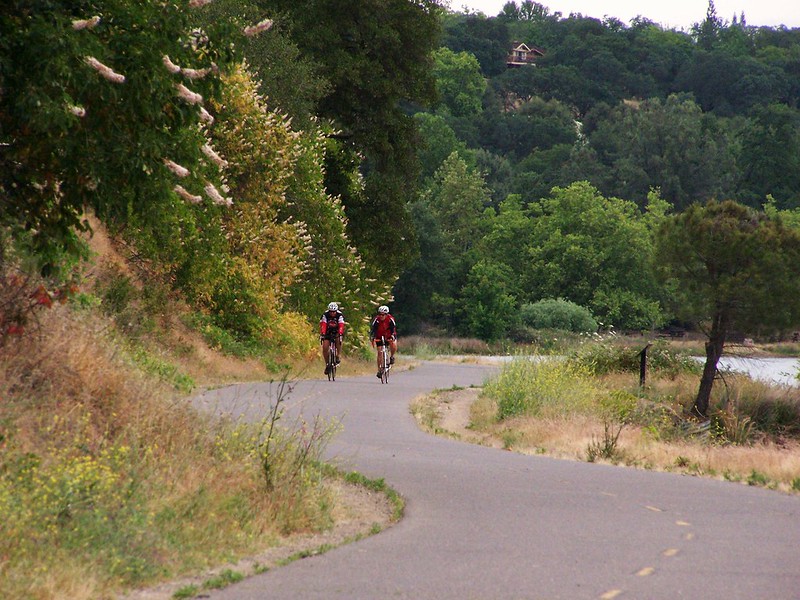 I suspect some users look upon the paved bike trail as a sort of sidewalk where bicycles might be encountered.  In reality, it’s actually a road created for bikes, and we pedestrians are something like guests. And just because you’re running as fast as you can doesn’t mean you’ve suddenly turned into a bicycle.

I try to always walk on the dirt shoulder and leave the pavement to the wheeled vehicles.  But that’s not always possible; there are quite a few places where there’s no shoulder at all.  In that case, I stay as far to the left as possible… and once in awhile, especially when there happens to be traffic going both ways, I’ll pause for a minute or two in a safe spot and let everybody go by.

It’s also good to remember that a good number of the cyclists out there are using the bike trail for their daily commute to work; kudos to them for getting out of their cars and finding a healthy alternative to sitting in bumper-to-bumper traffic during rush hour!  If for no other reason that that, I think we pedestrians can find a little courtesy and keep our eyes open for the two- and three-wheeled human powered machines on the American River bike trail.

Harness The Healing Power of Nature