A change in the weather

The cool weather that moved through here about a week ago?

I love it.  No, it didn’t do much to ease our current drought, but I always look forward to the change of seasons and the break from the summer sunshine and heat.  Plus I’m crazy about the smell of fresh air the rain brings.

It also reminded me of one of the best times of my life.  Almost exactly 19 years ago, back in late September 1996, Mom and I decided to “have an adventure” together, so we bought tickets on Amtrak’s Coast Starlight and headed up to Washington State, where she grew up.  The adventure part of it was that we were traveling coach, and there was no direct way to get where we wanted to go by train so we had to debark in Portland, catch the westbound Empire Builder in the wee hours, and then jump off again at the whistlestop in Wenatchee, Washington.  And then get a cab to the airport and hang around until the rental car place finally opened so we could drive to our final destination — Leavenworth.

We’d left Sacramento around midnight on Saturday, and we arrived in Wenatchee 6 AM on Monday morning.  Sadly, we just missed the Autumn Leaf Festival in Leavenworth; that happened on the weekends before and after we were in town.  I know a lot of people feel Leavenworth is much too touristy, with its Bavarian motif and abundance of gift shops.  But this was where Mom grew up — before the town received its makeover — and it still feels like home to her. 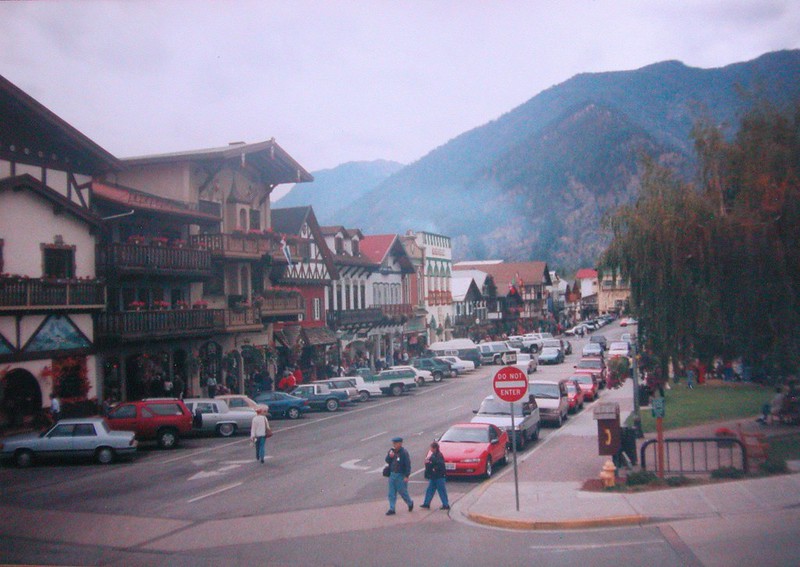 Leavenworth is a beautiful little town, set in the middle of the Northern Cascades, near the Wenatchee River and Tumwater Canyon.  There’s an awful lot of history around the area, like the Great Northern Railway; Leavenworth was once the Northwest railroading hub, and the Cascade Tunnel, completed in 1929 and 7.8 miles in length, was for awhile the longest tunnel in North America.  Amtrak’s Empire Builder still uses it, so we got to experience the tunnel first hand!

There’s also Alpine Lookout in the Wenatchee National Forest.  The Apine Lakes Wilderness Area is nearby, as is Stevens Pass — and don’t forget about the tour of Liberty Orchards in Cashmere.  You’ve heard of Aplets and Cotlets?  Two words:  free samples!  That was one of our favorite stops on the trip.  Below are a couple of souvenir post cards I bought.

I didn’t take anywhere near as many photos on the trip as I should have; of course in those days I didn’t have a digital camera!  I’d really love to have another chance to return with Mom and re-live the best parts of that trip. 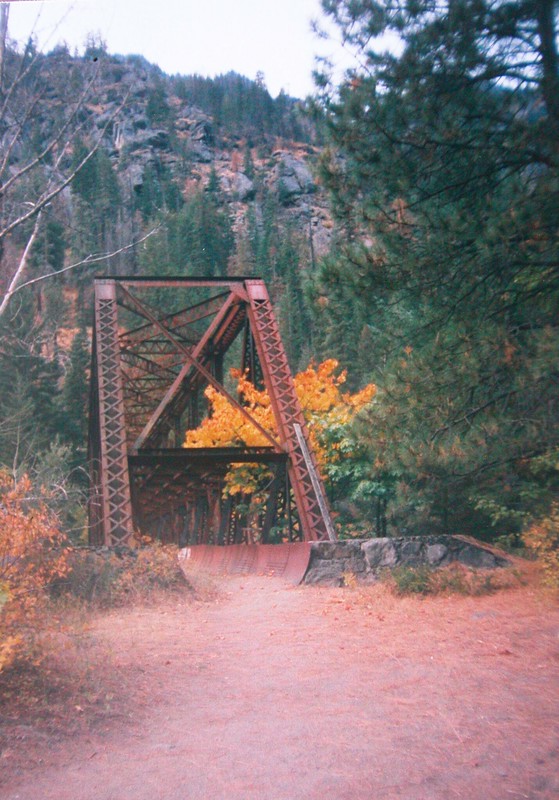 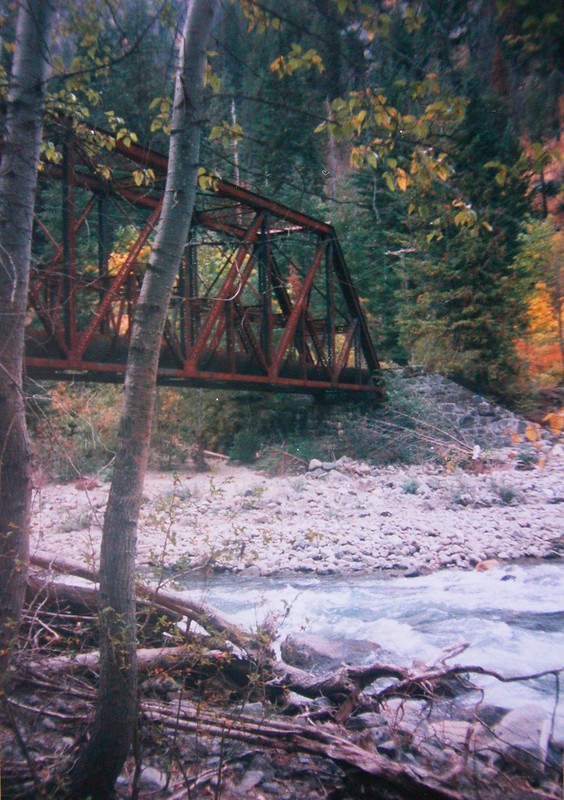 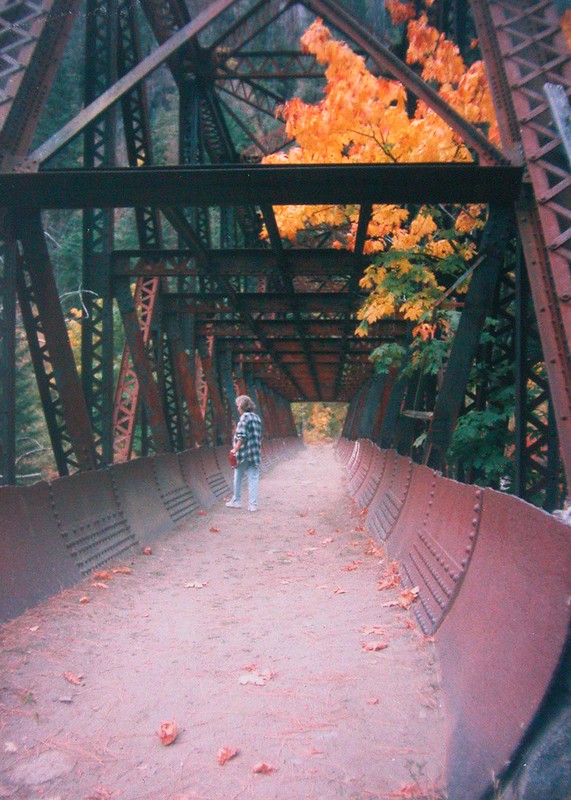 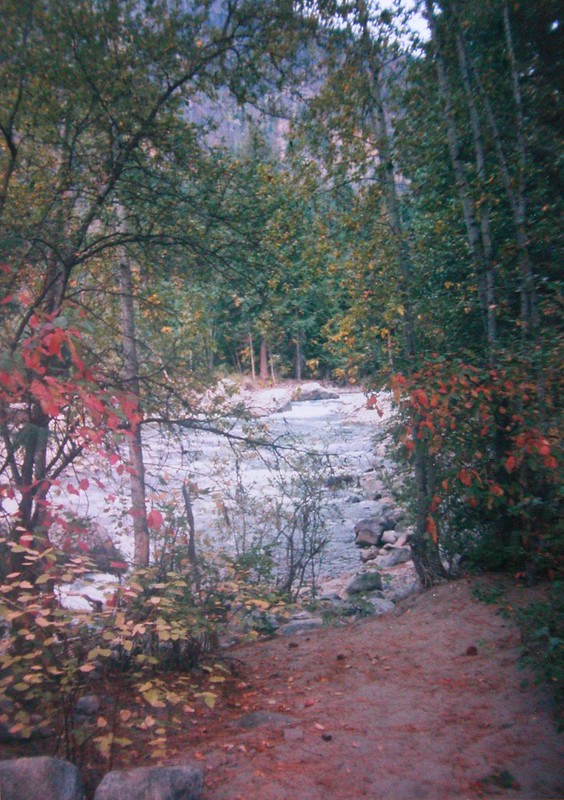 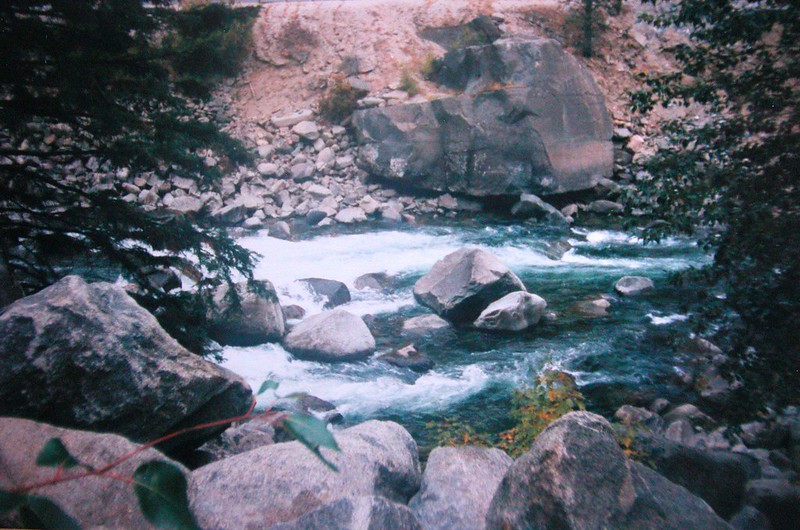 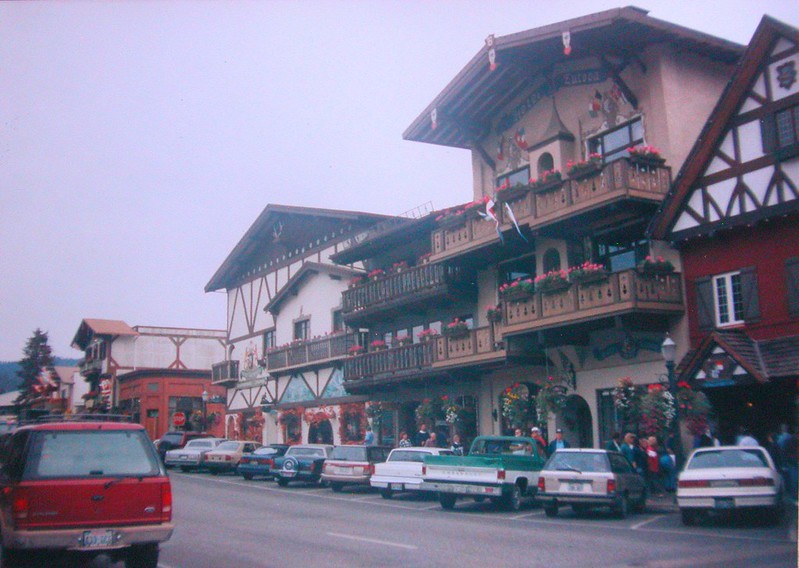 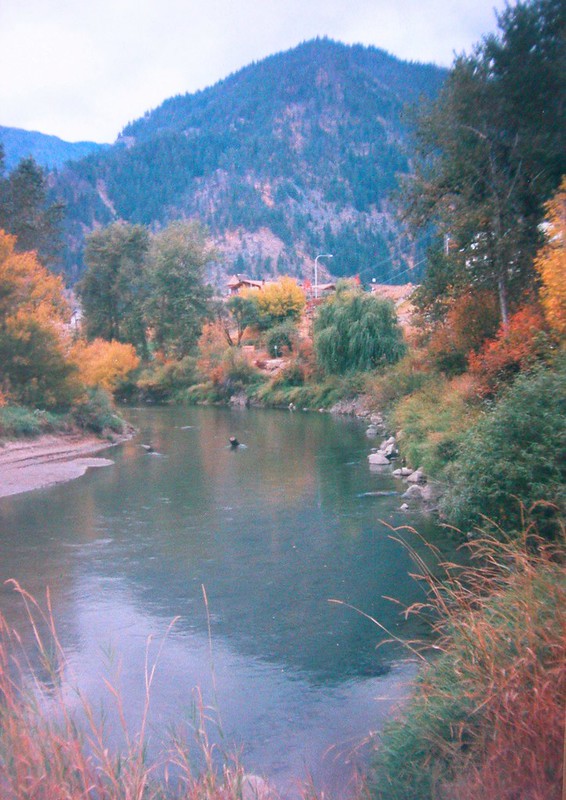 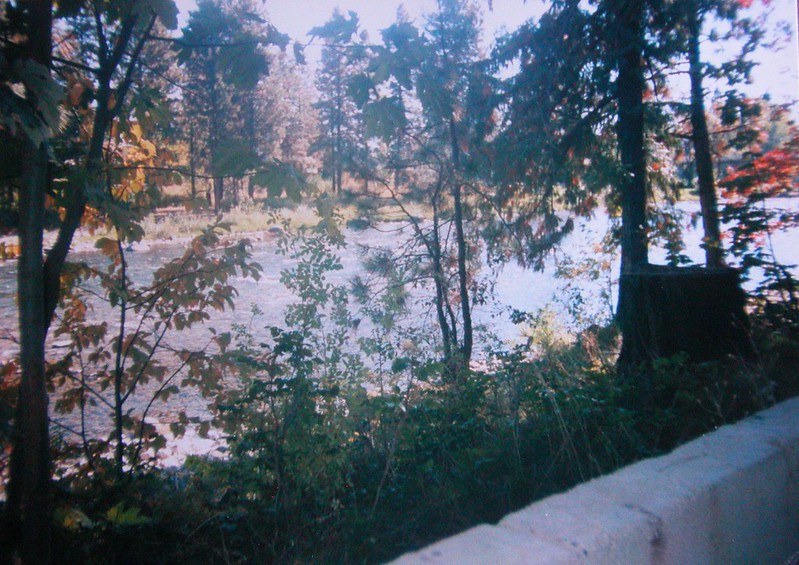 Wenatchee River from the back patio of our motel in Peshastin

While we were in the area, we also took a little side trip to Roslyn, Washington — where they used to film the TV show Northern Exposure.  That was fun! 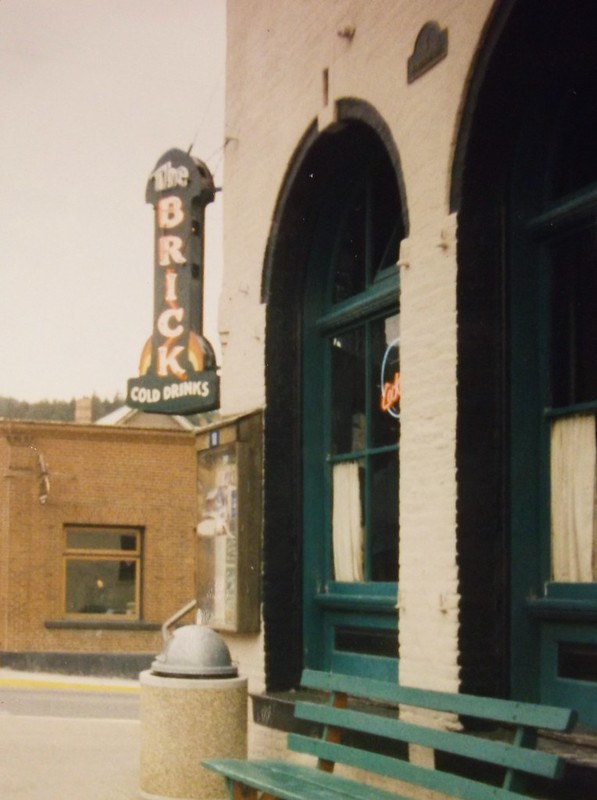 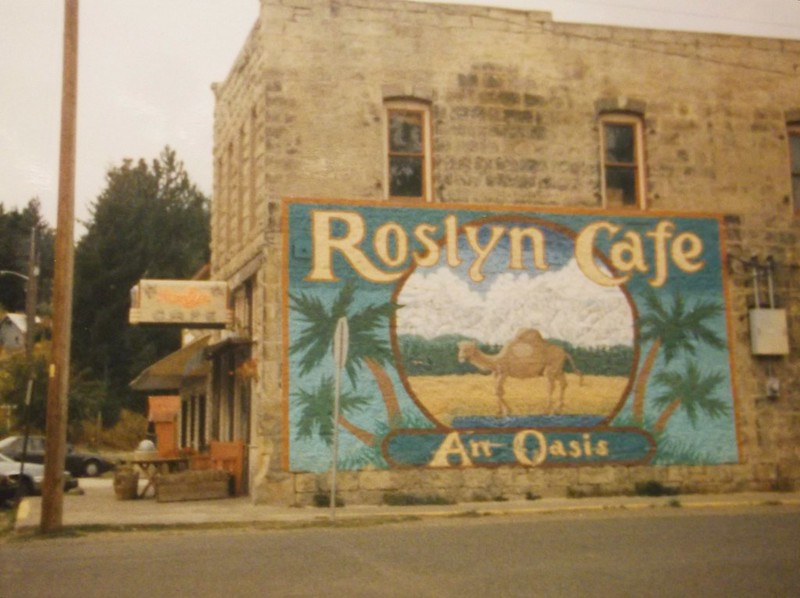 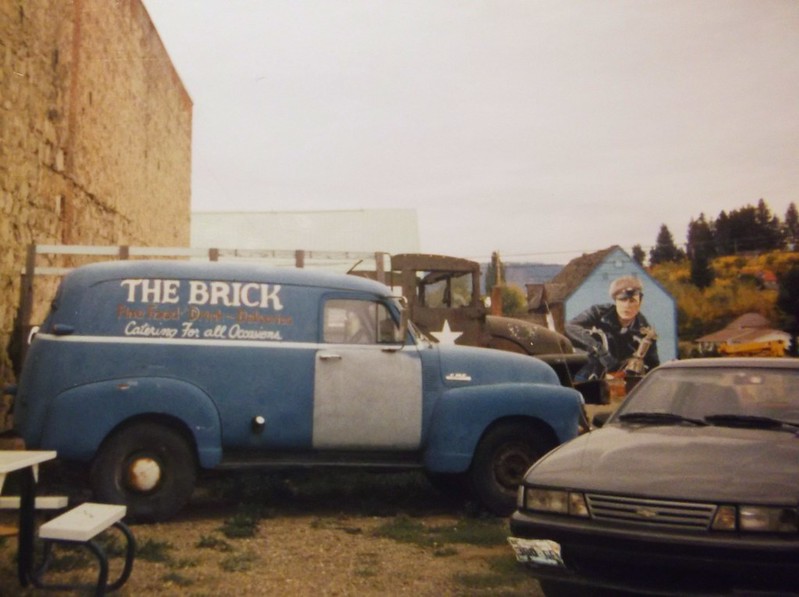 (That Marlon Brando mural was a complete surprise.)

After about a week in Leavenworth we caught the westbound train to Seattle, spent one night at the Pioneer Square Hotel, and then climbed aboard the Coast Starlight again (this time in a nice little Economy Bedroom) and returned home.

From the hotel’s brochure

Unfortunately, I didn’t take any photos during that part of our trip (I think my camera broke), but I definitely still have the good memories.  One year after our Washington trip, the changing season, the cool early mornings and the rain clouds had me feeling so nostalgic that I sat down and began to write everything I remembered — stuff I didn’t have the time or energy to record in the small trip diary I’d kept at the time.

I was surprised at how many details I recalled.  And taking the time to relive it in my mind and to put it down on paper was as good as going back again.  Well… almost!!

Taking in the wonders of the natural world