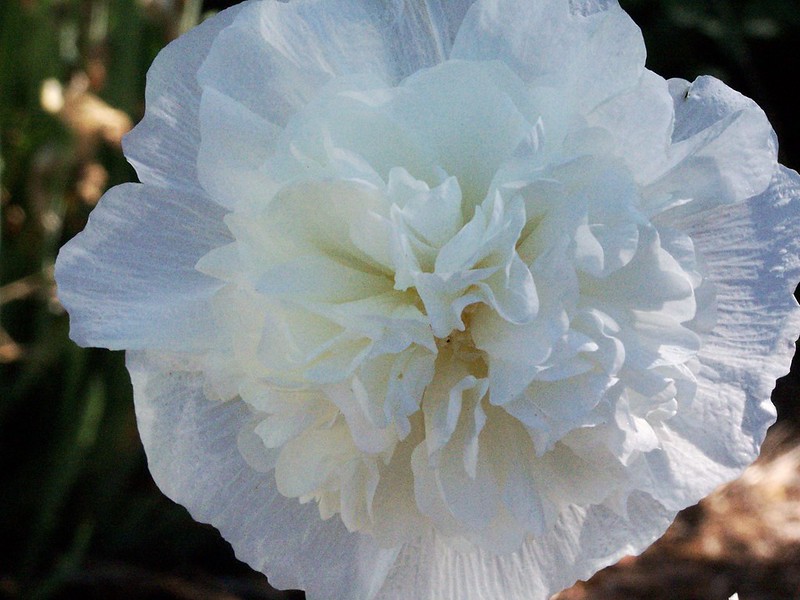 Hollyhock flower seen in my neighborhood.  These flowers originated in Asia and Europe and are now widely popular with gardeners.  Kyoto, Japan, holds an annual Hollyhock Festival every May.

For white flowers, I need look no farther than the camellias in my driveway.  We have two plants; one produces white petals and the other produces pink/red flowers.  Now is the time of year when both plants normally bloom.  The white is always the first to show flowers.

According to Wikipedia, the camellia originated in Asia; the taxonomist Carl Linneaus named them after a Jesuit botanist, Georg Joseph Kamel.

Growing up a few miles outside of California’s capital, I very often heard Sacramento referred to as “the Camellia City.”  The flower’s local popularity apparently goes all the way back to the 1850s, and even today there are a number of businesses, including the Sacramento symphony, using “Camellia City” as part of their name.  The nickname has faded quite a bit in recent times.  Camellia Days is not the big event it was in years gone by, although the Camellia Society continues, with the proud tradition of being “the oldest camellia show in the United States” (Camellia Society of Sacramento).