One more look at the Chicago area

This week, I’m revisiting Chanute Air Force Base as it was in 1957. In December 2017 I wrote a bit about the history of Chanute and its decommissioning in 1993. Even after the base closed, the Octave Chanute Aerospace Museum continued to display a number of airplanes until its closure in November 2015.

The B-50 Superfortress (above) was a redesign of the World War 2 era B-29 Superfortress; the last of these planes was retired from the US Air Force in the 1950s. Although they were originally designated as long-range bombers, many of them saw use as photo-reconnaissance planes, storm hunters, or in-flight fueling tankers for other aircraft.

The F-86 Sabre like the one above was the primary US combat fighter plane in the Korean conflict (1950-53). Their production ended in December 1956.

Below is the B-36 Peacemaker, a strategic bomber that was so big it needed a specially built hangar. One pilot, Lieutenant General James Edmundson, remarked that flying the B-36 felt like “sitting on your front porch, flying your house around” (on American Experience, PBS, January 1999). These planes also featured in the 1955 movie Strategic Air Command, which starred Jimmy Stewart. Today only a handful of these big birds still survive. This one (RB-36H AF), seen here sitting at Chanute Air Force Base in early 1957, is now on display at the Castle Air Museum in Atwater, California. 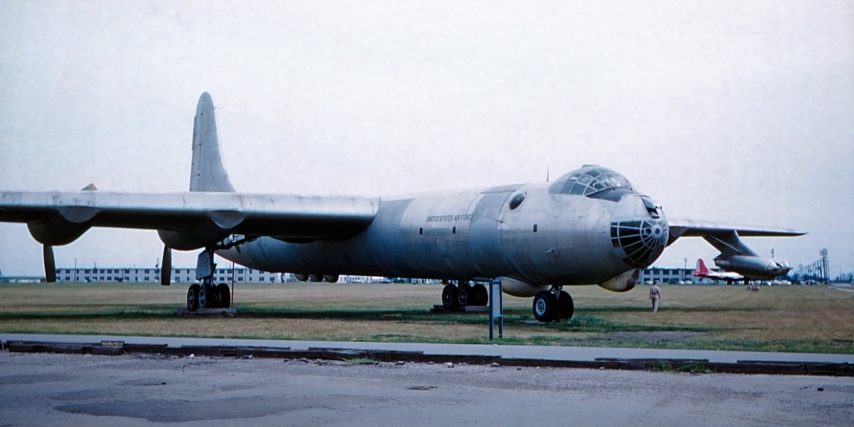