On our road trip to British Columbia the previous year, I’d slept inside the VW camper along with my parents; but this year, because I’d wished for a bit more privacy, my dad was good enough to bring along a small orange tent for me. Every evening he set it up at our campsite, and every morning he took it down and stowed it away before we moved on.

And all was well until we arrived back in Washington and the weather turned stormy. I woke up to rain at 4:30 in the morning, and an hour or so later everything inside my tent was soaked. 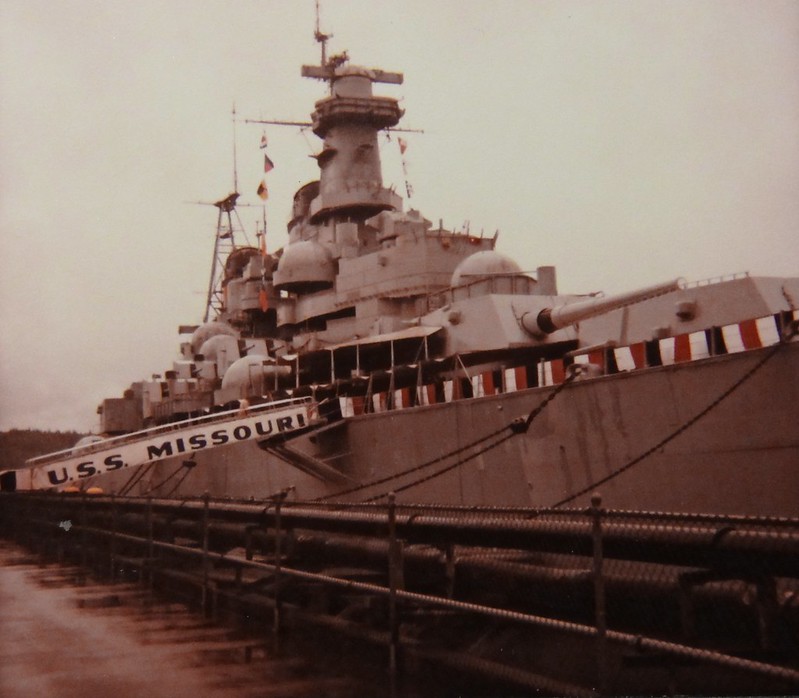 The rain wasn’t quite finished messing with our plans — my dad wanted to see the battleship USS Missouri, which had been deactivated in 1955 and docked in Bremerton as part of the Pacific Reserve Fleet (she remained there until the mid 1980s; she was then modernized and recommissioned in 1986). Actually getting to the ship from Port Angeles proved a bit tricky since we couldn’t take the most direct course; we discovered the Hood Canal Bridge on State Route 104 was closed “because of the awful weather, so we took the long way around to get there.” Instead of a 50-minute drive, it took us nearly 3 hours to reach Bremerton. But once we saw the USS Missouri, it was well worth it. 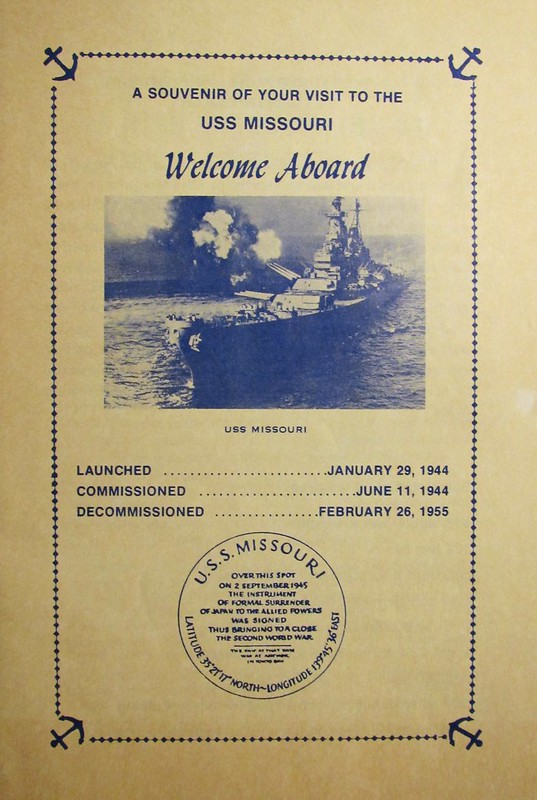 While on our cold, wet detour, we paused in a little town called Hoodsport; leaving Penny alone in the camper for a few minutes, we went looking for some snacks and returned with “some delicious doughnuts.” Unfortunately, once back in the VW we couldn’t find Penny anywhere, no matter how much we searched and called for her. This was getting pretty scary — until Penny finally stuck her head out of my sleeping bag in the back of the car. She may have been just a tiny pup, but it hadn’t take her long to find the warmest spot on that cold day! 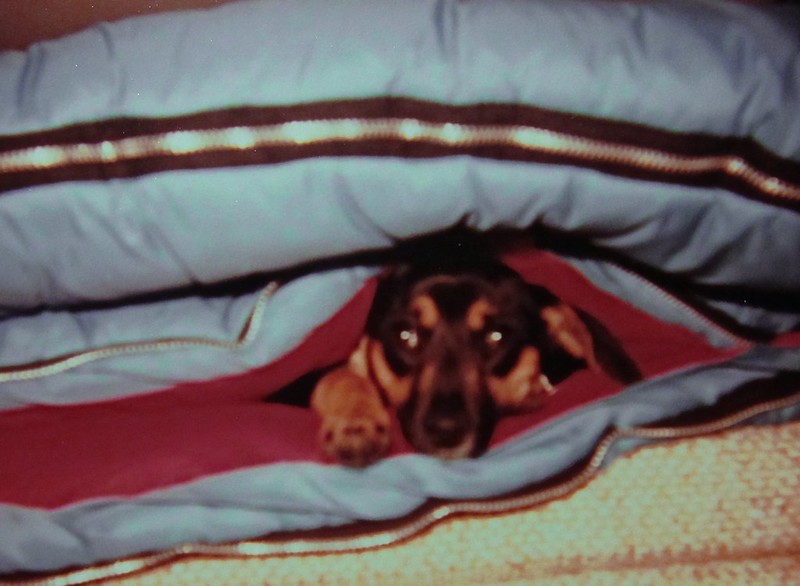 We camped that night at a KOA in Olympia, Washington. The weather was still causing trouble; I wrote in my notes that “since we thought it might rain that night I had to sleep in the upper bunk of the car. I dropped my pillow on the floor and didn’t sleep very well.”

Luckily, the blue skies returned the next day, and we headed for Portland, Oregon. The plan was to visit the Air National Guard base to say hello to a few guys with the 142nd Fighter Interceptor Squadron that my parents knew. 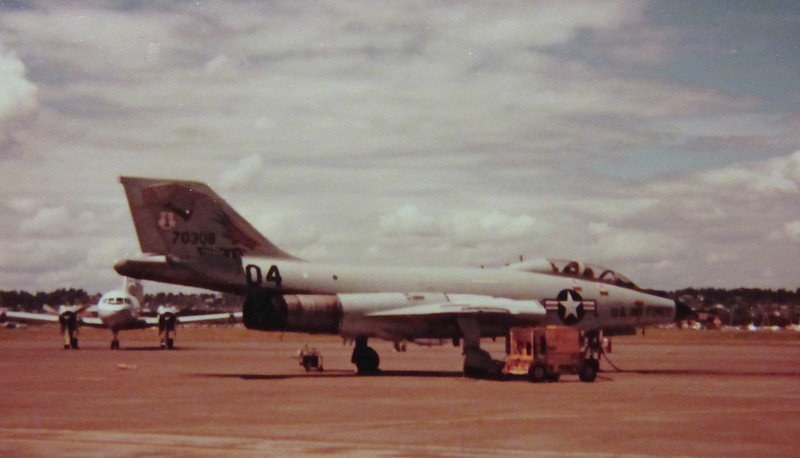 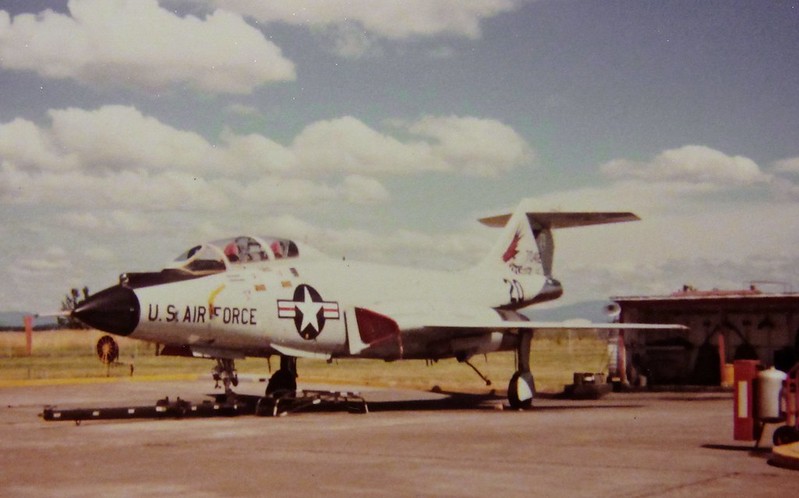 My mom was the lucky one — the flight crew allowed her to sit in the cockpit of an F-101 while my dad took her picture. (We’re still searching for that bunch of photographs, so unfortunately I can’t share that one just yet.) And then we were off to Multnomah Falls, where I shot a picture of my mom shooting the waterfall. 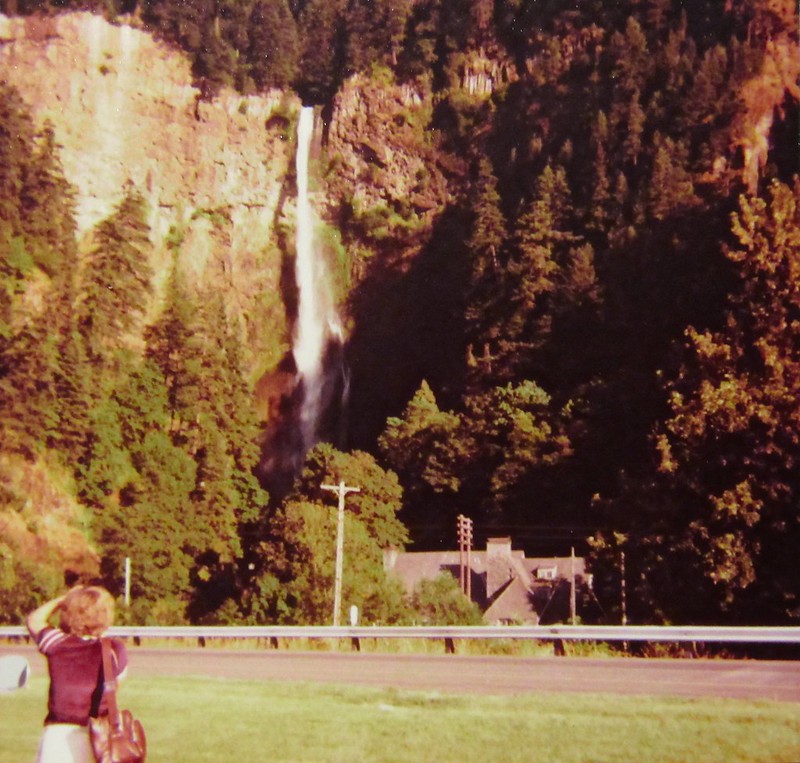 Our campsite that night was at a KOA near Bridge of the Gods on the Columbia River. I would have been happy to keep following the scenic river, but it was time to head south toward the Dalles and Crater Lake.